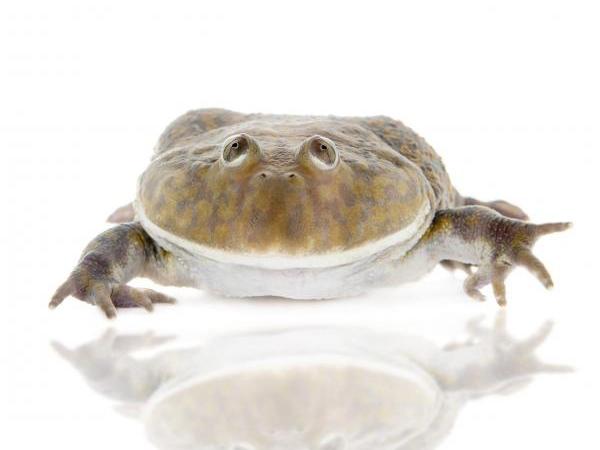 The Budgett’s frog can endear, scare, horrify and intrigue at the same time. Here’s how to keep one.

Budgett’s frogs are more aquatic versions of their cousins the horned frogs and come from the Gran Chaco region of South America, a semi-arid region spanning the borders of Bolivia, Paraguay and Argentina. In the wet season, they inhabit shallow pools where they predate other frog species, smaller members of their own kind and just about anything that strays too near to their huge mouths.

Like the horned frogs, they are ambush predators, lying motionless for much of the day before lunging and engulfing other creatures, but unlike horned frogs, Budget’s do their stalking in the water. Eyes and nostrils placed right on the tops of their heads, the Budgett's like to lie in just a few inches of water, blending into the surrounding mud, algae and plant life. They are a solitary species, coming together only to breed, and when the pools dry up in the dry season, they burrow in the mud and cocoon themselves, waiting for the rains.

They can be bred, with females attaining just over four inches and males, three, but the risk of the larger female eating the male will be omnipresent. To sex them, apart from the size, males should have a black throat, and females grey or white.

Budgett’s frogs need a 60cm terrarium devoted mainly to a water section, with a filter to break down their waste, some great example of these can be found in the Exo Terra range. Lighting can be bright to encourage the growth of marginal aquatic plants, and floating plants like Frogbit or Salvinia suit the frogs perfectly as they can lay underneath them while hiding away and feeling more secure.

The water section can either be substrate-free, smooth, round gravel or fine, soft sand. Mud and soils will block the filter.

The temperature in the terrarium should be between 25 and 29 Celsius, with the water depth three times the body depth of the frog. A soil area can be provided to encourage brumation although a dormant period isn’t necessary.

Feed adults three times a week on dusted Locusts and pre-killed pinky mice, offered with forceps. The huge mouth has just two simple, spiky “teeth”, so avoid feeding by hand or handling the frog. When frightened the frog can raise up on its legs and make a screaming noise, something that should never be encouraged.

Budgett’s will also eat fish, so don’t add any live fish to the wet display. But if you’re into horned frogs, aquatic predators and want something different, Lepidobatrachus laevis could be right up your street!

Written by: Jeremy Gay
Jeremy Gay is an author, lifelong fishkeeper, and exotic pet specialist. He's a former editor of Practical Fishkeeping Magazine, UK editor at Reefbuilders, a former pet store manager, and has collected wildlife in Sri Lanka and the Amazon. He's been on tv and radio, contributed to Koi Carp and Gardeners World magazines, been a product tester, a judge, and a product developer.