Are reptiles better together?

Categories: Uncategorised
Look inside to find out why reptiles should, or should not be kept with other individuals, and the dangers of cohabitation when done incorrectly. 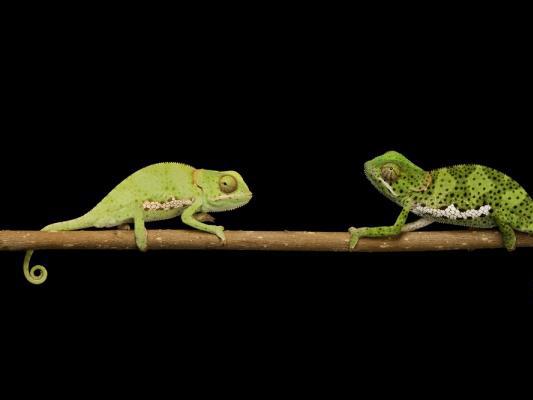 Being the predominantly social creatures that we humans are, when taking care of our pets we sometimes assume that they want some company, usually in the form of a member of the same species.

This seems only natural to us, but depending on the species of reptile you are keeping, it could be incredibly unnatural for your herp!

For this reason, its important to note which reptiles are likely to enjoy spending time together, and which ones are much better when housed separately.

Providing you have a large enough terrarium, reptiles like crested geckos are fine housed together. These guys don't tend to get too large in size, and so should be fine providing the other aspects of husbandry are catered for, including heat, light, humid conditions and plenty of places to climb and hide.

The same goes for smaller rainforest lizards such as green anoles, which can even be housed together with crested geckos generally without incident, giving you a greater variety in your reptile home.

Younger and juvenile reptiles can also be successfully kept together, such as hatchling bearded dragons, but they should be separated as soon as possible and placed into separate vivariums.

For safety reasons, we have to put most reptiles in this category. Unlike mammals which are live born and suckled by the mother, most reptile species are left and then hatched alone, left to fend for themselves at an early age, and are therefore left in direct competition with their siblings from the same egg clutch.

This has arguably meant that reptiles that are more aggressive to others (especially those of the same sex and therefore not a potential mate) have been more likely to survive in past wild-living generations, meaning that the instinct for territory and aggression to those of their own species is bred into them.

This is particularly evident in bearded dragons, where males will fight and claw each other when kept in close proximity, especially when they have reached adolescence and are ready to challenge others for the right to mate.

Thus, it is best that most species are kept thoroughly separate (although many can be taken out of their habitats for 'play time' under your watchful eye.

While the majority of aggressive incidents will be same-sex incidents of violence due to the competition for territory and mating, there are incidents between members of the opposite sex too. Mating for reptiles can sometimes get a little punchy, and so we recommend you speak to an experienced breeder or your local veterinarian before you go ahead with any planned breeding programme.

The conditions for breeding for each reptile are different, depending on the age of the reptile, their species, the temperature and humidity they need to be kept at, and even their diet.

But sooner or later, you are going to have to put the supposed breeding pair in proximity to one another. Do your research, and be vigilant and things should go according to plan!