Categories: InvertebratesHousing
Clean-up crew are the foundation of any bioactive enclosure, keeping it clean so you don't need to, but what are the different types of bioactive clean-up crew? 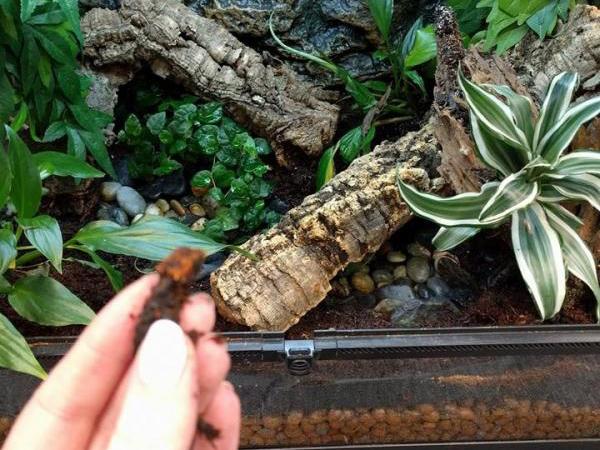 A bioactive reptile enclosure is a self-sustaining, self-cleaning miniature ecosystem, created using a clean-up crew of invertebrates and small arthropods and live plants, among other elements. Your clean-up crew will work to recycle nutrients by breaking down animal waste and other organic material into essential nutrients that can then be used by your live plants for sustenance. For more detailed information regarding bioactive setups, please see our dedicated bioactive help guide.

Springtails are by far the most common choice for clean-up crew, they're tiny, white invertebrates that will usually arrive as a culture in a tub of soil or charcoal. Springtails work best to keep the enclosure clear of any mould that may form under moisture, and break down animal waste and other organic matter.

Although your starter culture will already be booming when it arrives, you will need to allow some time for the Springtails to properly colonise your enclosure before you add your animal otherwise the colony may not be large enough to tackle the bioload of your pet. This is even more important for smaller species, such as Poison dart frogs, which may also see your Springtails as a food source.

Springtails do best in a warm, humid environment, so they are a perfect choice for tropical setups. However, you can use them in arid setups too, you just need to ensure that they have more humid areas to retreat to in the form of humid hides dotted around the enclosure. They will also retreat to the lower substrate layers, which should generally be kept slightly moist in an arid bioactive vivarium. For more information on arid bioactive setups, please see our arid bioactive help guide.

The second most popular clean-up crew option is Isopods, more commonly known as Woodlice. Tropical species of Isopod have very similar requirements to Springtails, so they make a great combination for keeping tropical bioactive terrariums clean. Isopods feed primarily on organic matter, such as leaf litter (which will also provide them with hiding places), decaying plants, animal waste and shed skin.

Being slightly larger and more conspicuous than Springtails, Isopods are more likely to be preyed upon by your pet reptiles and amphibians. This can be avoided (sort of) by ensuring you have plenty of ground cover from your leaf litter and other natural decors to keep them out of sight.

There are quite a few different species of tropical Isopods available on the market for this purpose, with Giant orange woodlice, Tropical grey woodlice and Mini speckled woodlice being the most common. Just like with Springtails, it is important to let your Isopods colonise the enclosure before adding your pet.

Earthworms make another great choice for a bioactive clean-up crew. A notable example is the Dendrobaena earthworm, sometimes named Red wigglers, a small compost worm that will work not only to feed on waste, but also to move through the lower layers of soil, keeping the soil moving and aerated, and preventing stagnant areas. These worms do great in warm temperatures, hence why they are so well suited as a bioactive clean-up crew.

Another option would be Giant lob worms (Lumbricus), which are a more full-bodied, large species. Giant lob worms, however, do not tolerate warm temperatures as Dendrobaena worms, so they make a better choice for cool enclosures, or are just used as a food source for larger reptiles and amphibians.

Dermestid beetles are slightly harder to come by. These Beetles are the final life stage of those small, fuzzy worms you tend to find in livefood tubs, where they feed on dead insects and sheds. Dermestid beetle larvae will eat almost anything, they're used in taxidermy to clean flesh from bones, and make a great bioactive clean-up crew. The Beetles themselves will make a less effective clean-up crew, tending to prefer a greener diet, but are worth keeping around for the larvae.