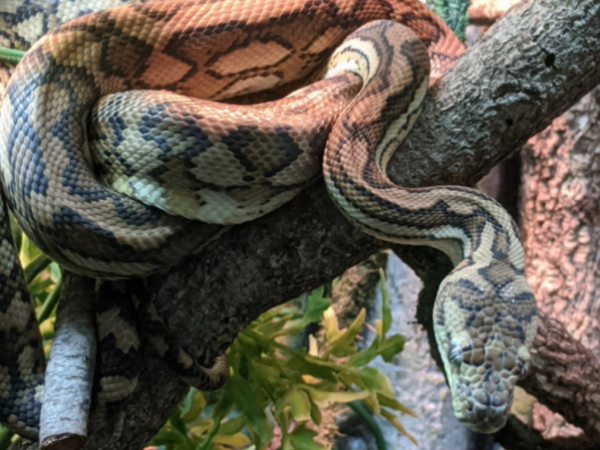 Fortunately, most snakes - when handled correctly and from a young age - are pretty docile and at their worst tend to be indifferent to your touch and presence rather than aggressive.

However, especially with rescued snakes that didn't have the love and care when they were younger, some can be unruly and a little dangerous. Even though you as their new owner are more than happy to give them love and attention, they could misbehave, striking or constricting when they feel threatened or perhaps mistaking you for food.

We don't really recommend taking on an aggressive snake if you are a relatively inexperienced handler, but here are some tips for handling those more aggressive snakes that can really help look after the well-being of both you and your snake.

One of the biggest problems that faces the snake keeping world is that of snakes that have been fed in their own environment. By putting food straight into their rub or vivarium, the snake will most likely associate the opening of their habitat and your approaching hand with food. This means that when you go to handle your snake, it is more likely to strike at your hand, mistaking it for their next meal. Even non-venomous snake bites can be painful and pretty destructive, so it goes without saying that this is to be avoided.

Instead, try to feed your snake outside of it's normal habitat, in something like a large plastic box. This way, the association between your hand and their food is lessened, decreasing the likelihood of your snake "biting the hand that feeds".

Getting your snake from it's home.

At this point, preparation is key: Make sure you have a suitable space, free from clutter to handle your snake in. It should be free from stimuli that might intimidate, aggravate or activate their hunting instincts. That means no food, no potential threats and no animal smells. Best practice is to sanitise your hands too as they might have food smells on them.

Next, you need to put on your protective clothing. Handling gloves are cheap, affordable and readily available and can greatly lessen the pain and damage of a snake strike. If you have a constrictor, you can more easily slip out of it's grip, leaving the glove behind should you need to.

Next comes the snake hook - an essential piece of snake handling kit used for years by exotic and aggressive snake handlers and those that tackle them in the wild. They come in many different sizes for you to pick the one that is capable of handling your snake.

Once they know that you are there and that you are neither food nor a threat, it is time to pick them up. Carefully move the hook under their body, about mid-way to a one-third-way from their head to their tail and gently life the snake using the hook, moving them out of the vivarium or box.

Once out, you have a choice, either keep the snake elevated, using the snake hook to control where the snake goes, or alternatively, put the snake down on a flat surface. Doing so means that you are likely to lose control of the snake, so be extra careful (not that you shouldn't be exercising plenty of caution anyway...)

If you choose to do this, make sure you keep a close eye on their movements. Try to stay close to their tail-end, using the snake hook to move their head in a safer direction. When it is time to put them back in their home, use a similar technique to how you got them out. Lightly grab the tail, and slide the hook under their mid-section, picking them up and putting them head first into their home so they can see where they are going.

No matter how hard you try, it is likely that at some point in your snake-keeping career, you are going to get bitten. Hopefully, it won't be too bad but it is best to read up on what to do before you begin handling your snake. Usually, for non-venous snakes this will involve cleaning the wound with an antiseptic (either wipe, gel or wash), stemming any excessive blood flow (not likely) by applying pressure, and dressing the wound appropriately. Consult a good first aid manual to find out what to do BEFORE handling your snake. Do NOT try to drag the snake off your hand as this will cause the tearing of your hand muscles and skin. Instead, stay calm and gently apply pressure with your free finger and thumb behind the snake's jaw, causing it to release.

Keep Calm and Carry a Snake

Above all, keep calm. Providing your reptile is not venomous, there is little threat apart from a bit of a bad nibble. If you stay calm, your movements will be more smooth and calculated and therefore less likely to alarm your snake, triggering their defensive instincts which can lead to striking.

Looking after an aggressive snake can be challenging, but ultimately very rewarding. Not many keepers are up to it, but good handling of these snakes can be a point of pride as you are giving a difficult snake a loving home when it might not otherwise have ever found one.

Learn more about snake care in our blog, try our Royal python care sheet to get started.