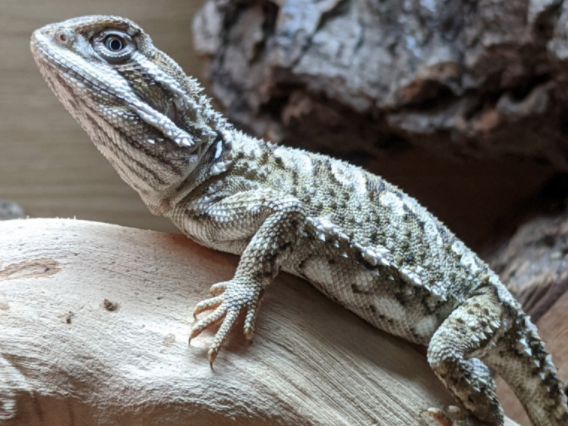 The Bearded dragon needs no introduction to readers of this blog (if it does check out our Bearded dragon guide), but while the beardie (Pogono vitticeps) is ever-popular, its relative Lawson's Dragon (Pogona henrylawsoni) is also proving popular.

Lawson's Dragon was only formally identified in 1985 and is named after the Australian author Henry Lawson. It is also known as Rankin's dragon, dumpy dragon, dwarf dragon or Pogona brevis.

Lawson's Dragon only grows to about 12 inches and has a lifespan of around eight years. They don't have a pronounced beard like their cousin the Pogona vitticeps, either.

These dragons are sociable and can be kept in groups of males and females. They are unlikely to fight and have a clear social hierarchy indicated by the dominant individual bobbing its head. The endearing response by the others is to wave their "arms".

Lawson's dragon also has a strange habit of opening its eyes so wide they seem to pop out of the sockets!

A compact vivarium of at least 36" would be ideal to house a pair of these dragons. Set up your vivarium with a temperature gradient ranging from about 33C to about 24C.

These dragons enjoy a sand substrate and maybe some wood chips as they like to bury themselves at night and have somewhere to dig.

As Lawson's Dragon are native to the baking hot sun of Queensland, they need a high UVB of about 10% so the Repti Glo 10.0 would be ideal.

Like bearded dragons, they are unfussy eaters - give them mealworms, crickets, vegetables and they also like a cuttle bone.

Some people who keep these dragons like to include a water bowl for them to bathe in - just make sure you keep it clean.