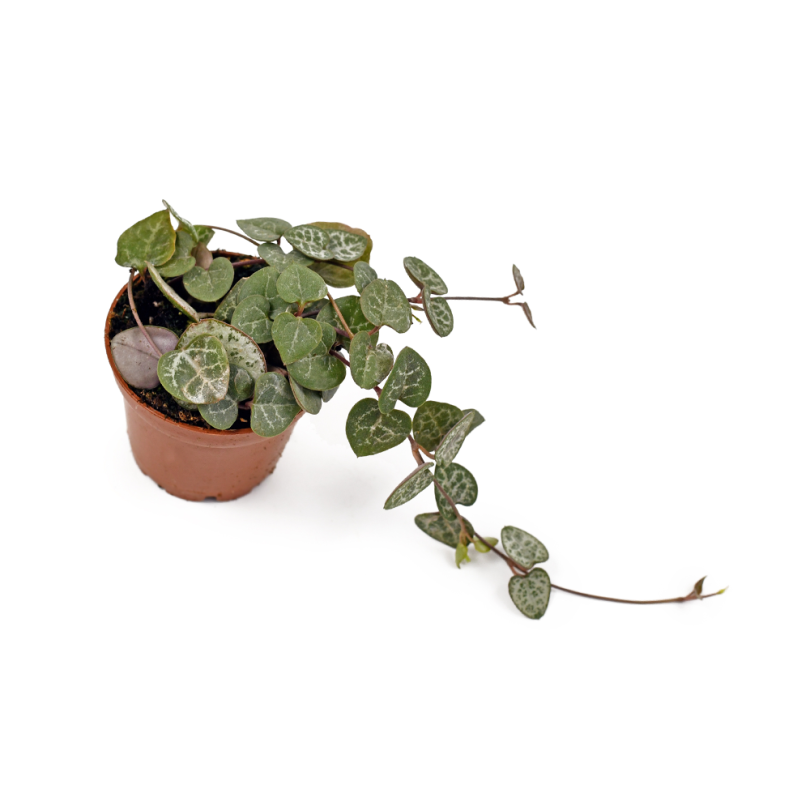 Skip to the beginning of the images gallery
At a glance...
This tough plant is perfect for arid terrariums, such as Bearded dragon enclosures.
Write a review
Details

Ceropegia, sometimes called String of hearts, Rosary vine or Sweetheart vine, is a popular hanging plant, easily identifiable thanks to its heart-shaped leaves, trailing vines and lantern flower. Coming from the native habitat of Southern Africa, this plant enjoys regular watering coupled with adequate drainage, avoiding common issues like root rot and basal rot. A mature plant can act as a mother plant, producing several 'children' via stem cuttings. There are several species in the genus Ceropegia, including Ceropegia woodii, the most popular species. This plant will be a Ceropegia chosen at random by our live plant growers where it will have been grown and tended to under carefully regulated conditions, ensuring it arrives in superb health.

Why should I buy Ceropegia?

The parachute flower and heart-shaped leaves of Ceropegia have long captured the hearts and imagination of gardeners, artists and poets. This family of plants has been called everything from the wine glass vine or necklace vine to the hearts plant. Ceropegia woodii has enjoyed particular popularity since its discovery by African botanist John Medley Wood in 1881, as its distinctive flowers have always stood out in the home. While Ceropegia can be a little difficult to grow, preferring high temperatures, good drainage and direct sunlight, they are a common first choice for exotic gardeners and can fit nicely in a dry and hot terrarium or vivarium.

Is Ceropegia an indoor plant?

Yes, Ceropegia likes to be kept at a constant temperature of 19C to 25C. It can benefit from natural light and time outdoors in the summer months, but it should be kept indoors throughout most of the year. For the best results, we recommend keeping Ceropegia in a terrarium where it will thrive under constant heat.