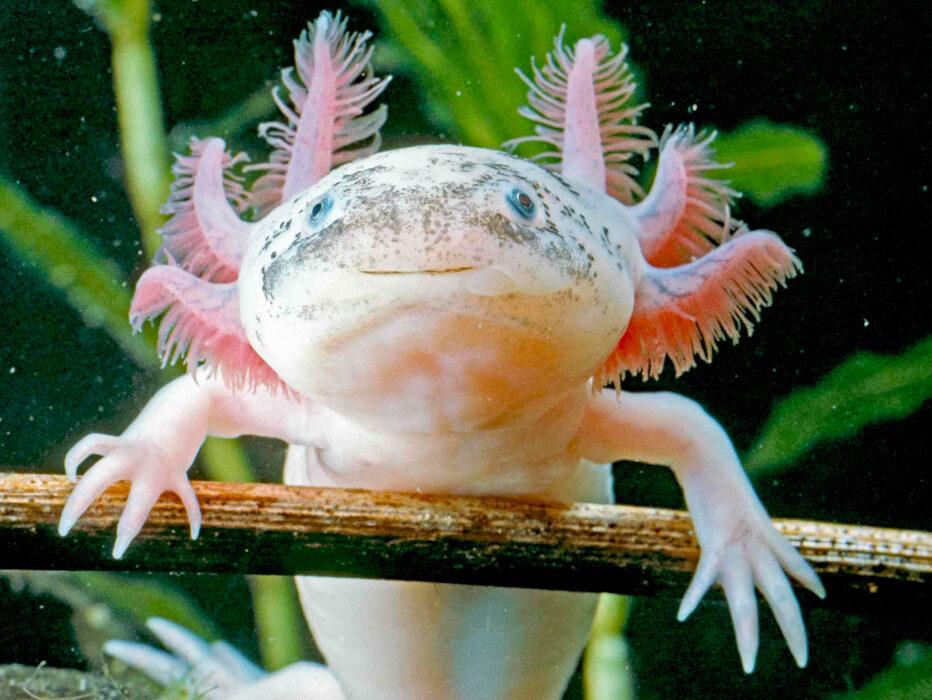 Axolotls are very charming little creatures, commonly kept as pets in the aquatic or exotic pet hobbies. Axolotls, otherwise known as Mexican walking fish, are not fish at all and are actually neotenic Salamanders. This means that they remain in the aquatic juvenile-like state, keeping their external feathery gills throughout their entire lives, but are still able to grow large, reach sexual maturity and breed.

Wild-type Axolotls are a brown/tan colour, with gold speckles along their bodies. However, mutations in their genetics has brought about a variety of colour morphs, such as albino, golden albino, leucistic, xanthic and melanistic, with some crosses between these morphs being seen in captivity due to selective breeding.

Axolotls are famous for their ability to regenerate limbs and organs, even their heart or brain, which has led them to be the focus of many scientific studies. They have even been found to have the largest genome ever sequenced in the animal kingdom, 10x larger than that of a human.

Axolotls originate from two main freshwater lakes in the Valley of Mexico, Lakes Xochimilco and Chalco. However, the expansion of the nearby Mexico City has put wild populations of Axolotl and their habitats at severe risk, with Lake Chalco no longer existing, and Lake Xochimilco existing only as a network of canals.

This intense habitat destruction, along with the introduction of non-native predators has left their wild populations decimated and nearing extinction, leaving them classed as critically endangered, although the species is still alive and kicking in captivity due to the pet trade, the sad reality is that they will likely be declared extinct in the wild in the near future without drastic action.

In our Axolotl care sheet, we will cover the ideal tank size, tank mates, temperature, lighting, water parameters, diet and more, to give you everything you need to get started with your new Axolotl habitat.

Axolotls generally grow to around 20-30cm (8-12"), although specimens of up to 45cm (18") have been recorded. Therefore, despite not being particularly active pets, they do require an enclosure with a good amount of space, especially if you're adding other Axolotls as tank mates.

The footprint of an Axolotl tank should take priority over the water volume. We recommend a 90cm (3ft) aquarium for a single adult, or a 120cm (4ft) aquarium for a pair of fully grown adult Axolotls. Young Axolotls can be housed in a smaller 60cm (2ft) aquarium, but this would need to be upgraded as the Axolotl reached maturity.

A new Axolotl tank should be treated in the same way as a new aquarium for fish, and should be cycled with ammonia for 6 to 8 weeks before introducing your new Axolotl, regularly testing the water until the ammonia and nitrites consistently remain at 0ppm, and you can begin to see the presence of nitrates - this means your filter is fully cycled and colonised by beneficial nitrifying bacteria.

Axolotls, unlike many terrestrial amphibians, do not require any specific lighting. A standard aquarium light to provide a day/night cycle will suffice, although they don't tend to like too much bright light, so it is best to keep it on a lower setting.

The ideal water temperature for an Axolotl aquarium is between 15-18°C (59-64°C), which means that in most instances, no heater is required. Most aquariums will come as a full kit, and already include a heater, in which case, it is worth keeping hold of in the event of a drastic temperature drop that may bring the water temperature lower than optimum.

Axolotls are very sensitive to poor water quality, and can make for quite messy pets. It is, therefore, a particularly important part of Axolotl care to provide adequate filtration to your Axolotl's tank.

Again, most aquariums are sold as kits and will come either with a drip filter system installed or with their own internal or external filter, which will already be rated for the water volume of the tank, although it is important to ensure the water flow remains steady and not too high, as Axolotls do not enjoy a strong water flow.

The required pH range for Axolotls is between 6-8, meaning a neutral pH is ideal. Chlorine, chloramine and ammonia should remain at 0ppm, with nitrates remaining below 10ppm ideally. General hardness should remain between 7-14GH and carbonate hardness between 3-8KH.

This means that in most instances tap water can be used for water changes, although it is important that all tap water is treated with an Aloe vera-free dechlorinator to remove chlorine and chloramines, which can not only be harmful to your Axolotl's permeable skin, but will kill your beneficial filter bacteria too.

Substrates are a slight area of debate for Axolotls. They don't have the best eyesight and will often ingest substrate during feeding times, which can be dangerous when the substrate particles are too large to pass. This means that substrate should either not be used at all, or should only be sand of a fine grain size, that can easily be passed.

A bare bottom tank will be easier to keep clean, but will be less aesthetically pleasing. Whereas, a tank with a fine sand substrate can be planted with live plants and aquascaped to produce a more attractive display set-up.

Axolotls don't need too much in the way of tank decoration, the main priority is hiding areas. You should provide your Axolotl with a few caves along the length of the aquarium, along with a cover from either a few live or artificial plants at a minimum (the more cover, the better), although it is important to select broadleaf plants, as those with more fine, spindly leaves can get entangled in an Axolotl's gills.

Axolotls feed primarily on animal material, which means they are carnivores, possessing poor eyesight but a keen sense of smell. They should be fed a varied diet of Axolotl pellets, large earthworms, bloodworm and other commercially available frozen fish foods, such as cockles and mussels. It is important to remove any uneaten food fairly quickly, as when the food is left in for too long, it can have a detrimental effect on your water parameters.

It isn't a difficult task to breed Axolotls, although the breeding of any animal should not be taken lightly. The exotic pet market is flooded with animals with poor genetics, bred by beginners from animals with underlying genetic issues. Due to this, we recommend avoiding breeding at all costs, unless you are extremely experienced and your animals are in perfect health.

To breed Axolotls, you must first be able to sex them. Male Axolotls have a large, swollen cloaca (the vent between the end of their body and the beginning of their tale), whereas female Axolotls will have a flat, unpronounced cloaca.

Axolotls generally reach sexual maturity at around 12 months old, although it is recommended to wait until they are around 18 months old and fully grown before attempting breeding, to avoid too much stress on the smaller bodies of younger Axolotls.

In nature, Axolotls breed during the crossover between Winter and Spring, so to induce breeding in captivity, you should perform a partial water change with water colder than that in the tank, to mimic natural seasonal changes and get them in the mood. Once you have done this, your Axolotls should breed readily.

The male will court the female, and if she is interested, he will deposit sperm sacs (spermatophores) onto a surface, where the female collects them, fertilising the eggs that she is already carrying.

Over the next 1-3 days, the female will deposit up to 1,500 fertilised eggs across the aquarium, usually on decor or plants. These should be removed as soon as they're noticed, as the parent is likely to eat the eggs if not. Place the newly laid eggs into a holding tank, with the parameters matching that of the adult tank, and wait. Eggs kept at the higher end of the required temperature range will hatch slightly faster than those kept at the cooler end of the range.

Hatchling care is similar to that of adults, although on a smaller scale. Keep water parameters the same, and offer them their first feed of small live food items such as Daphnia or Brine shrimp. Hatchling Axolotls have a proclivity towards cannibalism, so ensure you offer them plenty of food regularly, twice a day is best.

Once they start to develop limbs, care can switch to that of an adult Axolotl, and they should readily take non-live food items, whilst being less inclined to prey on their siblings.

The Axolotl is an extremely unique animal and an even more unique pet. This means that when it comes to alternative species, nothing comes close, and it ultimately depends on what attracted you to Axolotls in the first place.

If it was their aquatic nature, perhaps a Budgett's frog, or African dwarf frog, or even just a community aquarium might be a good choice.

If their looks initially intrigued you, maybe another Salamander species could be of interest, such as the terrestrial Fire salamander.

Axolotl care at a glance

Ease of handling: Handling should be avoided