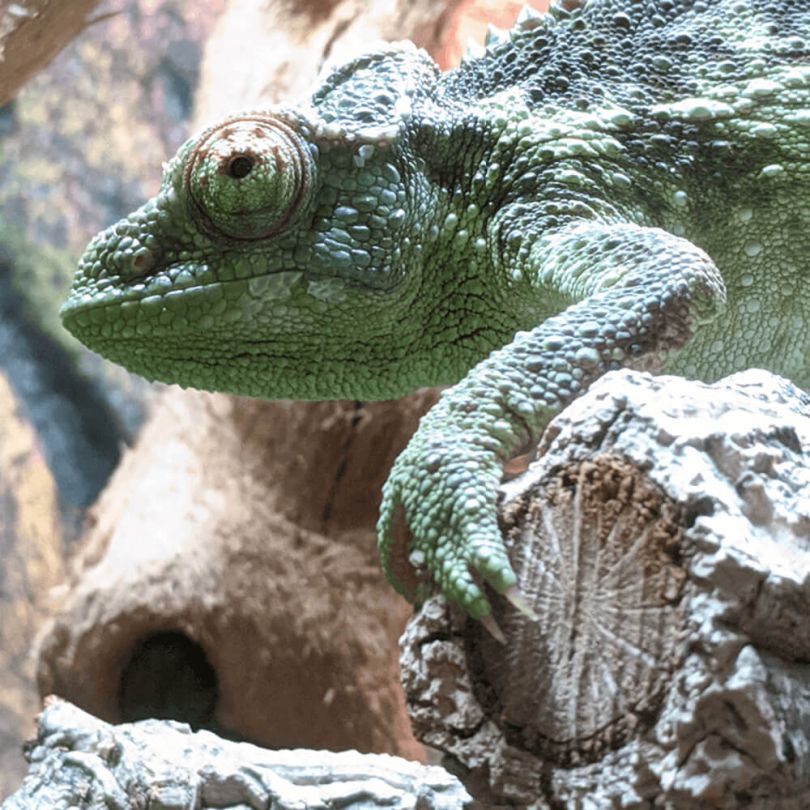 Skip to the beginning of the images gallery
At a glance...
Details

Jackson's chameleons are an arboreal lizard which inhabits the rainforest and mountainous regions of East Africa. This species is easily identifiable by the three horns protruding from the nose of males, which are actually a part of the animal’s skull, although they are not present in females of the species. Another interesting fact regarding Jackson’s chameleons is that they birth live young, in contrast to most other chameleon species which lay eggs.

Although Jackson's chameleons are often quite timid, and can usually be tamed enough to handle, chameleons, in general, can be a little moody and unpredictable, so it is best to keep handling to a minimum to reduce stress. At Swell Reptiles, all of our Jackson’s chameleons are captive bred in the UK, causing minimal impact to the environment and dramatically reducing the likelihood of parasitism and related health issues.

What enclosure does a Jackson's chameleon need?

We recommend a minimum adult enclosure size of 60 x 45 x 90cm (24 x 18 x 36”), which makes this Glass Terrarium the perfect choice, but if you have the space to go bigger, your chameleon will certainly appreciate this.

Do Jackson's chameleons need to be heated?

As with all reptiles, Jackson's chameleons are ectotherms and rely on external sources to control their body temperature. They should, therefore, be provided with a thermogradient that runs from warm at the top of the enclosure to cool down near the forest floor. This species requires a basking temperature of 30-32°C (86-89°F) and a cool end temperature between 22-25°C (71-77°F).

The best way to achieve this temperature gradient is by using an overhead heating system suspended above the mesh top of the terrarium. This can either be using a basking lamp attached to a dimming thermostat, or a ceramic heat emitter attached to a pulse thermostat.

Jackson's chameleons should be provided with a UVI between 2-3 to enable them to metabolise vitamin D3 and properly assimilate the calcium provided in their diet, preventing serious or even fatal health issues.

How do I decorate a Jackson's chameleon’s vivarium?

When it comes to decorating your Jackson's chameleon’s terrarium, you should first decide on whether you want to create a bioactive enclosure with live plants, or whether you would prefer to stick to artificial foliage. If you do not want live plants, a deep layer of a moisture-retaining substrate such as plain coco soil without a drainage layer will suffice.

If you want to build a bioactive display enclosure for your Jackson's chameleon, you will need to first create a drainage layer using Hydro Rocks and a sheet of Hydro Matting, before adding a good quality planting substrate such as ProRep Bio Life Forest or Arcadia EarthMix.

To allow your Jackson's chameleon to utilise all of the vertical space in their enclosure and to prevent stress, you should provide plenty of branches and vines to climb, and covered areas along these using foliage, either from real or artificial plants.

What do Jackson's chameleons eat and drink?

Jackson's chameleons are insectivores, and the key to a good diet for this species is variety. We recommend a diet of livefoods with crickets, locusts and cockroaches making good staple options, and other feeders such as waxworms or beetle grubs being great for occasional feedings or treats.

Jackson's chameleons will tend to not drink from a water dish, instinctually avoiding stagnant water sources. A running water source is a much better source of hydration for them, which can be provided either using a simple dripper placed on top of the mesh, or a more decorative reptile waterfall.

How do I buy a Jackson's chameleon?

All of our livestock must be collected from our physical store, where we perform a short interview with potential keepers to ensure any animal sold by us only goes to a suitable home.

If you would like to purchase one of our UK captive bred Jackson's chameleons, come in and see us, bringing with you some photos of your set-up completely ready for the chameleon to go into. We reserve the right to refuse adoption to anyone we feel is unprepared to adopt.