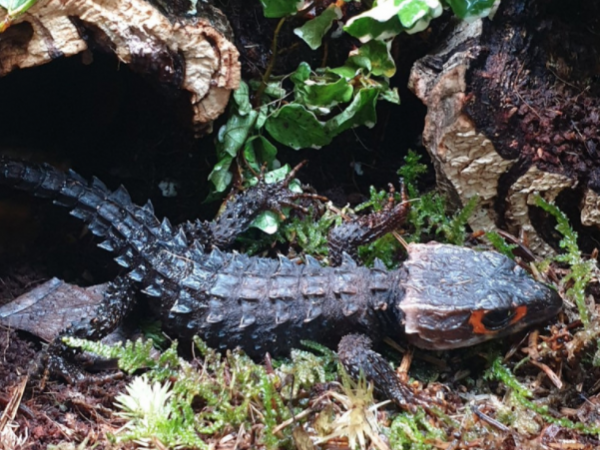 The Red eye crocodile skink is a small species of skink originating from South East Asia, inhabiting leaf-littered forest floors and mossy tree crevices, they are similar to the Fire skink or Pink tongue skink. They are most active during dawn and dusk when they would be feeding on a variety of insects. The name refers to their spiny appearance, much like a miniature crocodile! Our Red eye skinks also have an orange-red ring around their eyes. These skinks can be handled in moderation, though they are fast runners and can be a challenge.

Crocodile skinks can be an elusive pet, due to their natural crepuscular lifestyle and camouflage against earthy substrates. They are capable of swimming and climbing, however, and can be keen hunters of live food so you won’t be missing out when it comes to watching your pet.

For an adult skink we recommend a tank size of 90 x 45 x 45cm to ensure they have a good opportunity for roaming and exercise, some great examples of these terrariums can be found in the Exo Terra range. A portion of the tank should also incorporate a large water source such as a pool, waterfall or built-in stream, assisting in humidity and encouraging natural aquatic behaviours. Other tank additions could be cork bark, logs, rocks and foliage and all additions will go in the way of providing exercise and mental stimulation as well as making your skink feel comfortable.

To provide an essential basking spot a bulb or ceramic should be used alongside the relevant thermostat. The hottest area in the tank, the temperature under the basking bulb should remain around 30-32C during the day. During the night, a natural nighttime drop can be achieved of 15C without heating although this should be tested and never assumed. Hides should be available on both the warm side and cool side as your skink is most likely to bask out of sight. As well as heating, these skinks will also require UVB light, which is provided in a tube-like an Arcadia T5 6% which would be adequate as long the bulb is 40-45cm away. Much lower and Arcadia's shade dweller may be more suited. This bulb is used in a 12-hour cycle and replaced every 12 months - but other bulbs may differ.

This species requires a high humidity of between 70-90% which can be reached with good substrate choices like soil and mosses, large water sources, general misting and even the addition of foggers, which make a visually appealing habitat. You could also plant live foliage in the enclosure to promote a more natural experience for your animals.

Being insectivores, the Crocodile Skink will feed on a variety of live prey items such as crickets, cockroaches, locust, earthworms, small snails and calci worms - which should be dusted with relevant calcium and multivitamin supplements. Live food isn't necessary to feed daily and a couple of starve-days a week will ensure the skink stays within a healthy weight limit.

Written by: Jeremy Gay
Jeremy Gay is an author, lifelong fishkeeper, and exotic pet specialist. He's a former editor of Practical Fishkeeping Magazine, UK editor at Reefbuilders, a former pet store manager, and has collected wildlife in Sri Lanka and the Amazon. He's been on tv and radio, contributed to Koi Carp and Gardeners World magazines, been a product tester, a judge, and a product developer.
Recent Posts
Optional extras